A Brief History of Montblanc – The birth of an Icon

Montblanc started back in 1906 when a designer from Berlin called August Eberstein went into partnership with a Hamburg banker called Alfred Nehemias, and together they developed a range of simple-to-use fountain pens coined ‘simplicissimus’, referring to the pens simplicity, with the ink-well inside the pen.

The Company at this time was called ‘Simplo Filler Pen Co. Their Simplo pen became highly successful, with the first design called the Rouge et Noir. The Montblanc name first came into use in 1909, according to legend, during a card game.

The Montblanc trademark was registered in 1910, inspired by Europe’s highest mountain. The iconic snow-cap emblem was introduced in 1913, now a worldwide icon of luxury and class.

The now-famous Meisterstück pen was launched in 1924, and the 149 Montblanc fountain pen model soon became a style icon of its time.

By the close of the 20s, Montblanc had established itself as an international brand, known around the world. Some of their success can be attributed to the brand embracing new forms of advertising, such as fitting cars with oversized fountain pens.

Montblanc also branched out from pens to include leather goods from their workshop based near Offenbach in Germany. 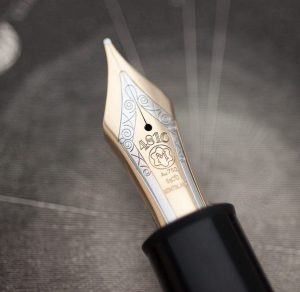 By 1935, the lifetime guarantee for the Meisterstück was established, and Montblanc began producing branded leather pen pouches, notebooks, and writing cases. 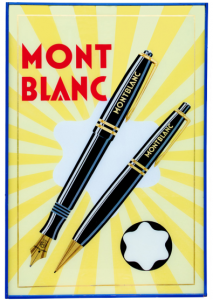 In the mid-1940s, Montblanc facilities were rebuilt after damage from WWII, and in the meantime, pens were manufactured in Denmark with representative offices established abroad. Following the success of the Meisterstück, Montblanc went on to develop other exciting new ranges with more designs.

The eighties boomed for Montblanc, sealing sponsorship initiatives within the realm of arts and culture from literature to ballet and music. Montblanc introduced the precious metal version of the Meistertück pens and coined the brand slogan: ‘Montblanc – The Art of Writing’.

Montblanc expanded its empire into the Asian market in 1990, the beginning of their openings of Montblanc stand-alone Boutiques. The success continued with more boutiques opening in Paris and London, a number today which now stands at over 350 boutiques in over 70 countries.

In 1996, the brand expanded into the men’s jewellery establishing Montblanc Montre S.A in Le Locle, a Swiss district known for its link to the watch industry. By 2000 the Meisterstück Sports watch collection was launched, heralding a new era for Montblanc.

Today Montblanc forms part of the Richemont group and is owned by the South African Rupert family.