The Heuer Monza is a watch of many lives. The original Monza, named after the Italian racetrack, was launched in 1976 to mark Ferrari’s World Championship in 1975 with Niki Lauda and Clay Regazzoni, the model remained on sale until the early 1980s.

The Monza was originally designed as a low-cost model, reflected in the case and dial movement. The case shape is shared with the 2nd generation Carrera from the late 1960s. Instead of the stainless-steel case of the Carrera, the Monza used a cheaper brass case. Most of the models were coated with PVD, though some had a chrome-plate finish. The downside of the brass case being it is softer than stainless steel and this more susceptible to wear and tear. Both coatings have a habit if fading. 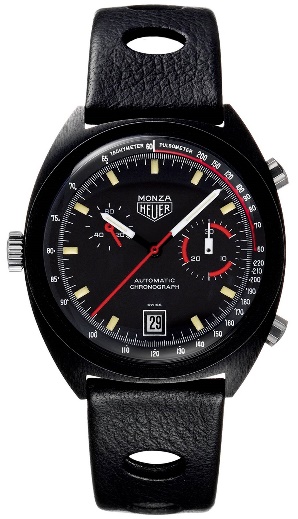 The original Monza, loved so much by Black Goose is characterised by a simple matte black dial, with luminous strips and a simple painted date window.
The early models were powered by Heuer’s Calibre 15 movement – the economy version of the Calibre 12.
The Monza is one of the few1970s models to have its name engraved on the case back. 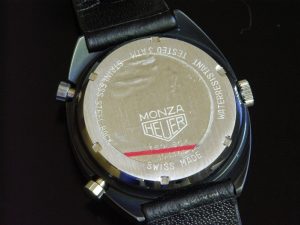 The Monzas were originally sold in a very cool Heuer helmet, which are now very difficult to find today. 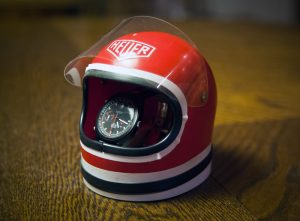 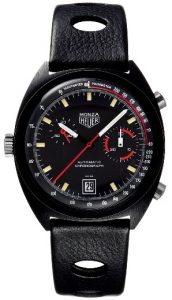 This is the classic model, with the plain black case, the Calibre 15 movement, and red highlights. There are a number of other models, but this is the flagship timepiece loved by so many. 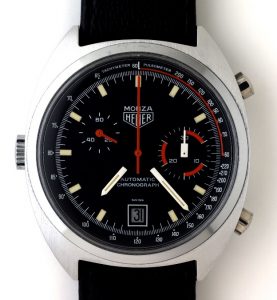 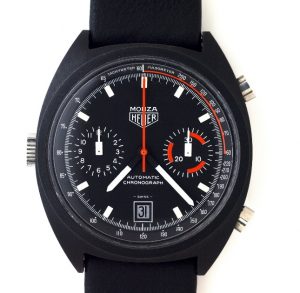 How collectable are the Monza’s?

The Monza’s are beautiful watches and as such are collectable, however many of the models haven’t aged well, and rarely look as good as the original, partially because of the pvd finishing.